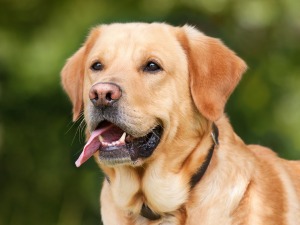 After a big storm, a golden Labrador goes missing in Sydney’s Cooper Park. This is the scene that begins my new novel-in-progress. I use the search for the dog as a linking device for my characters who are all at a turning point in their lives. I jump cut between discreet scenes (not a continuous narrative) which, unfortunately, is very confusing to the readers in my weekly feedback group.

Transitions are important in fiction because you can’t possibly show or account for every moment in a character’s day, week, or life. A story may stretch over years—readers don’t need to know what happened every minute of those years. A scene transition takes characters and readers to a new location, a new time, or a new point of view.

Scene transitions in movies are easy. The screen fades to black at just the right moment, and when it lights up again, you’re watching a new scene. But how do you write transitions on the page? How does your character get from Point A to Point B without too much boring detail and telling description?

One way to write scene transitions in novels is to Jump Cut. The term usually refers to Cinema.

‘When Jean-Luc Godard popularized the jump cut in 1959 when he made his breakthrough movie Breathless, it has since become a useful and intriguing editing tool. For those of you who don’t know what a jump cut is: (per Wikipedia): “A jump cut is a cut in film editing in which two sequential shots of the same subject are taken from camera positions that vary only slightly. This type of edit causes the subject of the shots to appear to “jump” position in a discontinuous way.”’ – posted by Tyler on Southern Vision

If you want to keep the narrative moving at a fast pace, you can jump cut on the page from scene to scene. But each scene needs to have a beginning a middle and an end.

This technique can be confusing at times, but effective and very readable.

One way to make Jump Cuts on the Page less confusing is to have a strong sense of place. The place is the setting of the story, where the action is located. Setting can be the connective tissue. For me it’s Cooper Park with its cafe, tennis courts, children’s playground, etc.  So, the missing dog, the park and the cafe lessen the confusion, make the transitions smoother – hopefully. 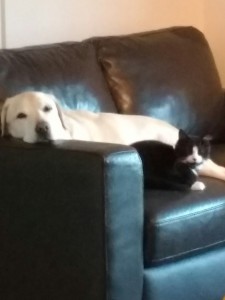 What about you? Do you find writing scene transitions to be one of the most challenging aspects of writing a novel? 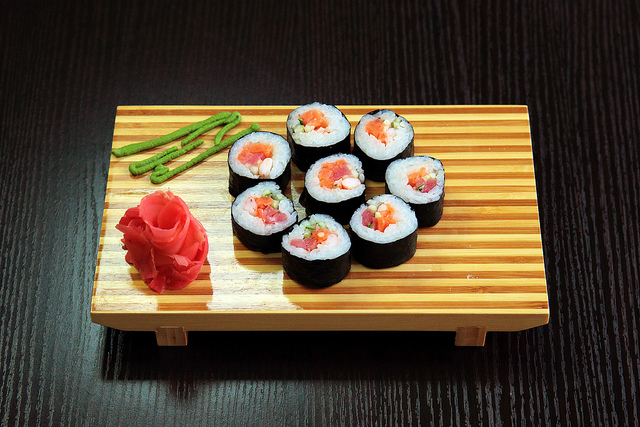 Sometimes there is a person in one of my creative writing classes who is obviously very talented.  I can bring to mind one in particular.  You could sense people holding their breath as he read, and often his hands shook.  The writing process opened him up.  He said he had wanted to write for years.  He was so excited about writing that he straight away wanted to write a book.  I said to him, slow down.  Just practice writing for a while.  Learn what this is all about.

In Japan becoming an itamae of sushi requires years of on-the-job training and apprenticeship.  After five years spent working with a master or teacher itamae, the apprentice is given his first important task, the preparation of the sushi rice.

Writing, like becoming a Sushi Chef,  is a life’s work and takes a lot of practice.  The process is slow, and at the start you are not sure what you are making.

Futomaki  (“thick roll” – rice on inside, nori on the outside)

Uramaki   (“inside-out roll” – rice on outside, nori on the inside)

It took me 14 years to produce a manuscript that a publisher was prepared to turn into a book.  I am forever grateful to small but prestigious Ginninderra Press for taking me on. Two books so far: My Year With Sammy (2015) and The Crystal Ballroom (2017).

So cut yourself some slack before you head off on a writing marathon.

Writing is like learning to prepare the rice for sushi:  the apprenticeship is long, and in the beginning you are not sure whether a Futomaki, a Uramaki or a Temaki will be the end result.

I had a five minute spot last Wednesday at the Society of Women Writers monthly lunch meeting at the State Library of NSW in Sydney. I was given the opportunity to stand up in front of a microphone and speak about my two books. It was a chance to confront my fear of public speaking and tell everyone ‘The Crystal Ballroom’ (Ginninderra Press) had been launched the previous week in Melbourne. I’d only spoken in public twice before, at the two launches. It was a very scary experience. Apparently, most of us fear speaking in front of an audience more than death. So, even though I appeared confident, my hands kept up their shaking for some time after I sat down again. But very pleased with myself for doing it. Those more experienced than me tell me it gets easier every time.

Anyway, the thrust of what I said was that I am transitioning from short story writer to novelist. My debut novel, ‘My Year With Sammy’ (Ginninderra Press) is really a novella and ‘The Crystal Ballroom’ a collection of short stories that I’ve linked together with an “I” narrator and the narrator’s friend, Ingrid. The two women get together over a coffee to talk about the dances they go to, who they see there, and who is sleeping with who, and who’s paying the rent 🙂

It was a device I used to turn a collection of short stories into a novel.

What about you? Have you been able to successfully change the form you write in?

Sometimes when people read my stories they assume those stories are me.  They are not me, even if I write in the first person.  They were my thoughts and feelings at the time I wrote them.  But every minute we are all changing.  There is a great freedom in this.  At any time we can let go of our old selves and start again.  This is the writing process.  Instead of blocking us, it gives us permission to move on.  Just like in a progressive ballroom dance:  you give your undivided attention to your partner—keep eye contact for the time you are dancing together—but then you move on to the next person in the circle.

The ability to express yourself on the page—to write how you feel about an old lover, a favourite pair of dance shoes, or the memory of a dance on a chilly winter’s night in the Southern Highlands—that moment you can support how you feel inside with what you say on the page.  You experience a great freedom because you are not suppressing those feelings.  You have accepted them, aligned yourself with them.

I have a poem titled ‘This is what it feels like’. It’s a short poem.  I always think of it with gratitude  because I was able to write in a powerful way how it was to be desperate and frightened.  The act of self expression made me feel less of a victim.  But when people read it they often say nothing. I remind myself, I am not the poem, I am not the stories I write.  People react from where they are in their own lives.  That’s the way things are.  The strength is in the act of writing, of putting pen to paper.   Write your stories and poems, show them to the world, then move on.  The stories are not you.  They are moments in time that pass through you.

What is your experience? 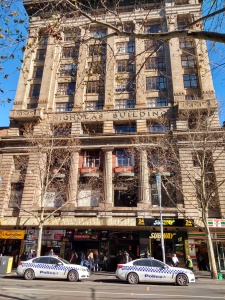 A big thank you to my publisher Stephen Matthews, Ginninderra Press for a wonderful afternoon of celebration last Saturday at Collected Works Bookshop in the historic Nicholas Building, Melbourne.

Ginninderra Press celebrated 21 years of independent publishing and Stephen Matthews launched my second book, ‘The Crystal Ballroom’. That’s him looking on as I read the first couple of pages of the story. The room was jam-packed full of people. Hopefully, the audience were enthralled and wanted to read the rest of my book.

Other Ginninderra Press writers from all over Australia attended the event and many read a poem or a story including my new friend, the award-winning Melissa Bruce.

We all enjoyed ourselves drinking wine and eating cheese and other tasty bits and telling each other about our work.