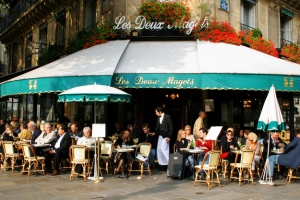 He leaned back on the chrome chair, stretched his legs out under the square black table and placed his mobile phone in front of him. He looked over to the counter at the back of the cafe at the cakes and muffins on display and the Italian biscuits in jars. He turned back to the glass windows and wondered if he had the guts to tell her today. He wanted to. By Christ he wanted to. He straightened up, his elbows on the table, his hands clasped together in front of his face. There’d been some good times, that’s for sure. But what the heck. A man’s got to do what a man’s got to do.

The sliding glass door clanked open and Anny walked in. He looked over at her, first from the rear as she closed the door and then as she approached, her face flushed, her dark hair flying back from her shoulders. Not bad looking. A bit on the heavy side but not a bad looker all the same. Yes, there’d been some good times. Especially in the sack.

Anny removed her sunglasses as she walked over and he looked into the bright green of her eyes as she bent down and kissed him on the cheek. He felt the moisture on her face as her skin touched his.

She took off her sunshade and hung it on the back of the chair and sat down.

I’m still so angry I can hardly speak. She pushed her hair away from her forehead as she dabbed at the sweat with a serviette.

This man, she said. This dreadful man. Anny used her fingers to wipe the moisture from under her eyes. I was walking along the cliff path from Bondi to Bronte, like I usually do, minding my own business, when I heard a jogger behind me.

Nothing unusual about that.

So I moved further to the left to let him pass.

Yeah. That’s the rules, keep to the left.

He must have been about to pass on the inside because next moment I heard a thud and there he was picking himself up from the side of the track.

Anny stopped talking as the waitress approached with notepad and pen.

A spaghetti marinara for me, said Daniel smiling at the waitress. And a coffee.

He grinned at her. Hot and black, thanks.

Anny turned away from him and squinted at the blackboard. I’ll have the Greek salad and a decaf skimmed cap. And a glass of water, please.

And I’ll have an orange juice as well, said Daniel.

Daniel’s eyes followed her as she walked towards the kitchen. Then his mobile buzzed from the table. He picked it up and held it to his ear.

Yep, he said. I can give them a ballpark figure, but that’s about it. Just a ballpark. Yeah, okay then. Here’s his number. Daniel opened the front of the phone and pressed a button. 0413 501 583, he said. He put the phone back on the table its antennae sticking out towards Anny. I hate it when people say things like that, he said.

Oh nothing. Just the usual crap. They all think they can get something for nothing.

Daniel’s pasta arrived first and he began to eat. He sucked in a spaghetti tail and then impatiently cut some of the pasta with his knife. He dispensed with the knife and continued to eat with his fork. He scooped up the marinara with its splayed-like prongs.

So what happened? he said as he sucked in a loose strand of spaghetti, catching its long skinny tail with his fork.

He must have caught his foot on the edge between the footpath and the grass. I was about to say ‘are you all right’ when he roared out at me ‘it’s all your fault you know’. ‘I was keeping to the left’ I said. He ignored me and ran on, red shiny shorts flapping. How dare he speak to me like that. ‘Asshole’ I called out after him. He gave me the finger up sign and kept running. I was furious.

Daniel didn’t answer as he waited for the waitress to place a plate of salad in front of Anny. He blew on his pasta before placing another mouthful towards the back of his tongue, his thin lips closing over the fork.

When I reached Bronte, said Anny. This man had finished his circuit and was on his way back. We recognised each other and he started telling me off about which side of the path I could walk on. ‘Don’t tell me where to walk mate’ I hissed. That’s when he stopped jogging and moved towards me. I thought he was going to punch me.

I was a bit scared I can tell you, but I braced myself. That’s when he said ‘you’ve got some chip on your shoulder because you’re fat and ugly’. I laughed at him because it sounded so ridiculous and as far as that was concerned it proved my point. What an asshole. Just thinking about it makes me angry.

Daniel turned away from her. He couldn’t tell her now. Not after that. He looked out the window to the truck parked across the road. ‘Dean’s Premium Natural Fruit Juice: the way it should be’ emblazoned on the side. The way it should be. That’s a bit of a joke. Well I know this is the way it shouldn’t be. He couldn’t get Louise out of his head.. That last time – her tight white t-shirt over those tight little breasts – leaning over her plate. Eating that huge roll. The sight of her opening her mouth so wide he thought the sides of her lips would crack. Stuffing it in she was. Later at her place when he couldn’t wait. Coming up behind her as she cleaned her teeth. Ramming it in.

He tore the crusty white Italian bread into small pieces and used it to mop up the remains of the sauce and wiped the red sauce from the corner of his mouth. He reached for his glass and sucked up the remains of his orange juice through a yellowed straw, then burped. He put the glass down, his broad hand wrapped around the grooved surface and leaned across the table. He looked into Anny’s face.

I want to make a move on that Elizabeth Bay deal.

He stood up, his keys dangling from the loop at the back of his trousers, his rubber soled shoes silent as he headed towards the door. Only the sound of his keys and then the bang of the door.

Outside he pulled out his mobile and dialed.

I’m leaving now honey, he said. I’ll be there in a few minutes.

In the cafe Anny watched from the window. She sighed, stood up slowly and then walked over to the cake counter. He’s a workaholic that bloke.

I’ll have a slice of that chocolate mud cake and a cappuccino, she said to the girl behind the register.

2 thoughts on “Fortnightly Story: Towards the End”